Posted on October 9, 2019 by mzsunflower

When Lou Zezoff, a 74-year-old Vietnam veteran, stopped at a Cracker Barrel with Annette, his wife, he wasn’t expecting to end the meal in tears.

Lou makes a habit of wearing his cap, with “US Navy Vietnam Veteran” printed on it, whenever he goes out.

It was this cap that caught the eyes of five young men sitting near to him as they waited for their food in the Granite City, Illinois establishment.

As Lou and his wife were eating, one of the men approached their table. Lou automatically stood up, noting that he and his friends looked like servicemen due to their haircuts.

He wasn’t sure what was going to happen, but then the young man extended his hand for a handshake and profusely thanked Lou for his service to the country.

It was a gesture that definitely surprised Lou, who hadn’t expected something like this to happen in a random restaurant.

But that wasn’t all – the other four men came over to continue thanking him.

They were all Marines and wanted to make that night one that Lou would never forget.

The young men eventually went back to their seats, and Lou and Annette finished their food.

They called for the check, and that’s when the waiter told them that the bill had already been paid for by the young Marines.

On the receipt were the messages “Semper Fi” and “Oorah”.

Shocked, Lou went back over to their table and told them that he knew they likely didn’t make a lot of money due to their jobs.

He said their thanks was more than enough and they didn’t have to pay for his food. But the Marines insisted and wouldn’t take no for an answer.

They truly wanted him to know how much they valued him.

After a while, the Marine men planned to leave. But before they did, the young men went back up to Lou and his wife.

They all shook his hand and gave him a hug each, one at a time.

Lou couldn’t help feeling tears well up in his eyes at their simple but truly thoughtful gesture that showed how much they appreciated him and respected his sacrifices.

All around him, the diner had fallen silent, and they were all staring and watching the touching and moving events unfold.

Then, lastly, one of the Marine’s gave Lou and extremely sharp and formal salute, and all five men turned and left the establishment.

Breathless, Lou turned to his wife, who told him he should probably sit down and collect himself after such an amazing, heartwarming occurrence – one that she, too, was still reeling from.

It wasn’t long from then when the five Marines were located by a news station.

They were private first class Marines and, when asked why they had done this for Lou, they replied that it was just the right thing.

He fought for them and for their country, and it was now their turn to return the sacrifice.

Servicemen and servicewomen truly deserve compassion, respect, and gratitude for all that they have done for their nation!

Posted on March 22, 2018 by mzsunflower
Categories: kirk weisler, coffee sugar, exercise 3, yoga class, and walking in the garden. | Tags: beat cancer, gratitude, one day at a time | Leave a comment

Some great quotes to read often…

“What others need from us, on an ongoing basis, is to know that they are cared for, that their good deeds inspire gratitude, and that others love them.  It’s that simple.  And just because they hear such sentiments on Monday doesn’t mean that they won’t need to hear them again on Tuesday.  This is the primary reason why words that heal and inspire must be repeated again and again.” Rabbi Joseph Telushkin

“Many couples have never learned the tremendous power of verbally affirming each other.” Gary Chapman

“The deepest principle of human nature is the craving to be appreciated.” William James

Posted on January 3, 2013 by mzsunflower 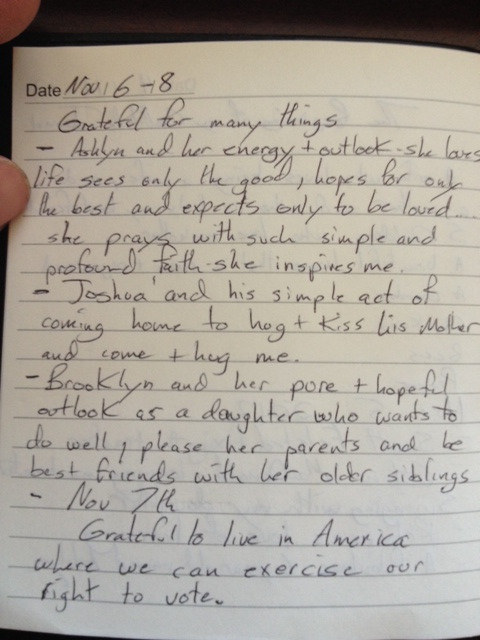 I recently met a lady who told of her habit of keeping a gratitude journal.  In it she writes at least 3 things each day that she is grateful for.  She explained how she has been doing this for many years and how it has profoundly changed her life by helping her to change her focus.   She was very convincing.

I like to think of myself as a grateful person and one who readily recognizes and expresses gratitude. (But I know I have room to improve)  As the parent of teenagers who I feel could be more aware and expressive of gratitude I certainly liked this idea “for them”.   So I presented each of them with an empty book and explained the vision.  Accountability could happen at any time that I called them to share with me the latest entries in their gratitude journal.   They were willing but hesitant…so I offered that I would also be keeping a gratitude journal and would share with them as they shared with me.

I haven’t been perfect at it…as it’s still becoming a matter of habit for me, but I have been very energized and inspired as I have reflected on what I am grateful for.  It has also been at least somewhat evident that the exercise is also having an effect on the kids.   Cultivating a grateful heart is not the result of a single choice…or thought…but of the cumulative effect of thousands of them.   I know I have a journey ahead of me….perhaps we all do.  For my part, I am grateful to be on this journey and to be traveling with people who are also becoming more and more aware of all we have to be grateful for.

It has been my experience that grateful people serve more readily, give more generously and smile more often than those that are not.  I want to become one of those that are.  If the charge against me is “Gratitude”… I would like to be found guilty.