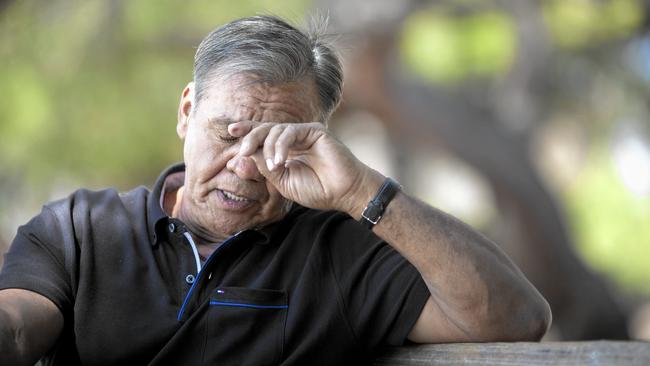 In June, Juan Romero did something he hadn’t done in decades. He celebrated his birthday, going out to dinner with his family in San Jose.

“I always dreaded when June was coming up,” said Romero, 65, who has struggled for most of his adult life to let go of his crippling memory of an American tragedy.

It happened just after midnight on June 5, 1968. Robert F. Kennedy had won the California presidential primary and made his victory speech at the Ambassador Hotel in Los Angeles, where Romero was a 17-year-old busboy.

Juan Romero and Claudia Zwiener visit the RFK memorial at the former site of the Ambassador Hotel. Zwiener is a German citizen who became friends with Romero and helped him work through his feelings about the assassination. 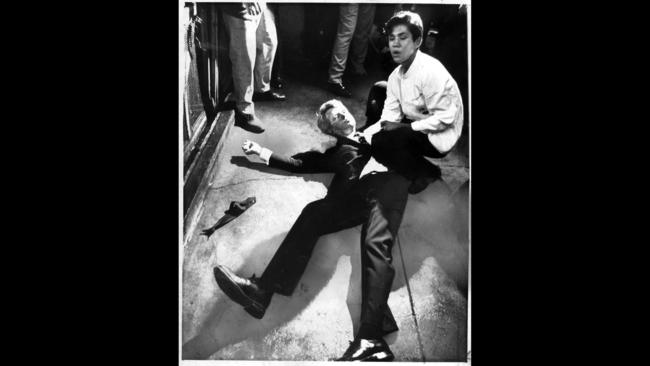 A stunned Juan Romero holds Robert Kennedy’s head after the presidential candidate was mortally wounded at the Ambassador Hotel.

A Roosevelt High School student who had moved north from Mexico at the age of 10, Romero recalled the photos of President John F. Kennedy that hung alongside those of Pope John XXIII in the homes of Mexican families.

He worked at the hotel after school and had delivered room service to Kennedy earlier in the week. He knew he’d never forget the way Kennedy treated him and the pride he felt, and now he wanted to congratulate him as the candidate made his way through a kitchen service area. Romero reached out, took Kennedy’s hand, and watched him slump to the floor as gun blasts echoed.

The black-and-white photos of that moment, by Boris Yaro of the Los Angeles Times and Bill Eppridge of Life magazine, are as haunting now as they were 47 years ago.

RFK, who for many people represented hope for social justice, racial tolerance and an end to the war in Vietnam, lies on his back, limbs splayed. Romero squats at his side in white service jacket, a young witness to horror, his hand cradling Kennedy’s head.

“I wanted to protect his head from the cold concrete,” says Romero, who went to school the next day with Kennedy’s blood crusted under his fingernails, refusing to wash it away.

In the photos, disbelief and despair gathered in Juan Romero’s dark eyes, and he would carry the weight of that moment through the decades. I knew this when I first met him on the 30th anniversary of the assassination, and his pain was just as raw 12 years later in 2010, when I went with him to RFK’s gravesite in Arlington, Va., where Romero knelt, paid his respects and wept once more.

He spoke to me each time about his regrets, his sense of duty to the Kennedy legacy, and a lingering feeling of guilt. I told him there was no rational reason to feel guilty.

“I don’t know if you can understand this, but [what happened in 1968] … made me realize that no matter how much hope you have, it can be taken away in a second.”– Juan Romero
But the shooting had wounded his psyche. On far too many nights he lay awake wondering if Kennedy would still be alive if he hadn’t paused to shake a busboy’s hand.

It was a different Juan Romero, however, who reached out to me earlier this month to say he was much improved “spiritually and emotionally,” and it was all because of an unlikely friendship with a woman from Germany who saw my column about the Arlington visit, tracked Romero down and helped him finally step out of the past.

Claudia Zwiener, 45, was a teenager when she first read about the Bobby Kennedy assassination. She became insatiably interested in his life.

As an adult, she read books about Kennedy, traveled to the U.S. with her husband, visited the gravesite, and met people who had known him, including former L.A. Times national editor and Bobby Kennedy press secretary Ed Guthman.

Two years ago, Zwiener came upon my column about Romero’s visit to Arlington. She wrote to me saying she was touched by his humanity, and didn’t believe he needed to ask Kennedy’s forgiveness, as he had that day in Arlington. Not long after that, Zwiener sent Romero a message.

Many have reached out to Romero over the years, and he appreciated their concern but wondered as to their motives. He didn’t want pats on the back he didn’t feel he deserved, or comments that stoked his own second-guessing of his actions that night. He hoped Zwiener wasn’t yet another “somebody who wants to feel sorry for me.”

But Zwiener came across differently.

“She really wanted to see how I was doing, and to find out if she could do anything to make it easier on my conscience,” Romero said.

He answered back. She responded. They became pen pals, then began talking by phone.

CAPTIONAssassination of Robert F. Kennedy
Associated Press
March 23, 1968, Sacramento The candidate Sen. Robert F. Kennedy campaigns at a shopping center in Sacramento a week after announcing his candidacy for president. He was 42 years old and serving his first term in the U.S. Senate. His campaign would last only 82 days and would end in violence in Los Angeles in early June, just moments after his greatest political victory. In your words: Share your memories of Robert F. Kennedy and 1968

Zwiener is not a trained therapist, but she works with special-needs children in Germany, and Romero felt that he could talk to her in ways he had never been able to with other friends or his own family. In time, they began talking about his struggle.

“I don’t think she intended to fix me initially,” says Romero, “but as we came to know each other, she knew something was broken in me.”

One day, while visiting his mother in Tulare, his guilt surfaced again while he spoke to Zwiener by phone. He said she comforted him by saying that in some of the photos, taken just moments after the shooting, the shoes of bystanders can be seen at a safe distance from Kennedy. But there’s Juan, who didn’t take cover, trying to help a man in need.

Romero traveled to Germany to meet Zwiener, her husband and their children, and the Zwieners came to California. Last August, Romero returned to the site of the assassination with Zwiener.

The hotel is long gone, and in its place is a school and RFK memorial bearing Kennedy’s words, which read in part: “Each time a person stands up for an ideal, or acts to improve the lot of others, or strikes out against injustice, it sends out a tiny ripple of hope …”

Zwiener worried about Romero’s ability to handle the visit. As they approached, she trembled, but was relieved to see that even though Romero wept quietly, he was OK.

On another day Zwiener carried a book that had those iconic photos of Romero at the Ambassador — the photos he had glanced at once or twice in nearly half a century, but never studied. She turned to the photos and described what she saw.

“Juan slowly, slowly dared to take a look,” she said.

When I asked Romero what he saw, he said:

“I saw a person in need and another person trying to help him.”

Romero moved to Wyoming shortly after the assassination. He needed for his own sanity to leave the Ambassador, where guests insisted on being photographed with him.

He returned to Los Angeles before long but later settled in San Jose, where he continues to work as a concrete and asphalt paver. It’s good exercise, he told me when I visited last week, and it keeps him young.

On each anniversary of RFK’s death, Romero takes flowers to a memorial in downtown San Jose, where Kennedy delivered a speech during his winning primary run. Romero misses Kennedy, or at least what Kennedy seems to have represented as a statesman and presidential candidate. He misses him all the more in the midst of a current campaign in which the hottest topic is a proposal to build a higher wall between Mexico and the United States.

Romero has always believed the best way to honor Kennedy is to live a life of tolerance, to work hard, to take care of family, and to not be a burden.

“I don’t know if you can understand this, but [what happened in 1968] has made me more humble,” Romero said. “It made me realize that no matter how much hope you have, it can be taken away in a second.”

Romero was carrying rosary beads in his pocket the night of the assassination. He stuffed them into Kennedy’s hands as the former U.S. senator and attorney general lay mortally wounded, two months after the assassination of the Rev. Martin Luther King Jr., and less than five years after President Kennedy was gunned down.

Romero says no one else may have heard it in the commotion, but he insists that Kennedy spoke after being shot, as one eye blinked and his leg twitched.

“First he asked, ‘Is everybody OK?’ and I told him, ‘Yes, everybody’s OK.’ And then he turned away from me and said, ‘Everything’s going to be OK.'”

It has taken Romero 47 years to believe that. He and Zwiener haven’t discussed June 5, 1968, for three or four months, he said. They talk about other things — the things friends talk about.

Romero will travel to Germany later this year to vacation with her family, and he has bought himself a new wardrobe because he feels as if he’s begun a new phase.

He still thinks about Kennedy, he said, but he no longer drowns in sorrow or regret.

“I don’t carry the cross anymore,” he said.